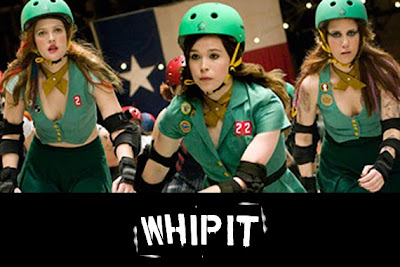 My sister knew how excited I was to watch Drew Barrymore's directorial debut, WHIP IT. So, she recommended that I read the book. I did, and I totally loved it. It was just so sweet, so funky, and so a teenager trying to be cool. I loved it! I totally felt for Bliss. Her yearning to be in a different place, feel something new. The joy in meeting a new boy to just go crazy silly for. Then the heart ache. Oh the heart ache. It sucked and made me want to cry. Boys suck balls!


Now, I'm done reading the book and I really want to watch the movie, which I have to watch at my sister's place bc she has the DVD...and it's Blu-Ray. Mother fucker. I'm not so lucky to be up with the Jones' ;) and have all those cool gadgets...(OK, so I have some. But not that one. I'm the kettle. My name is Black.) I start watching it, and I can immediately notice the differences between the film and the book. I knew that the author of the book also wrote the screenplay. I was expecting the film to share the same emotion and teen angst that Ms. Cross exposed in her book. What did I see? Nothing. Boring, lame, quiet, nothingness. It felt so long, but as the audience, we missed out on all the secret inside jokes shared between Bliss and Pash. We missed how strong their friendship is.

Oliver. Where do I start. Physically wrong. And the whole Señor Smolder wasn't even mentioned! In the book, you get the idea that he's this mysterious, oh-so-hot, make your knees go week and you need to change your underwear the moment you lock eyes with him. The dude they chose for the film, and his debut was less than stellar. It sucked ass.

I'm just bummed that Drew Barrymore, a chick that I think is so rad and I really admire how she turned her life around, disappointed me with this cool story. All in all, great actresses in the film, but bad movie. Check out the book. SO MUCH BETTER!
Posted by norcalpeach at Thursday, April 15, 2010